THE FATHER, THE SON, THE HOLY SPIRIT, AND YOU

"Go therefore and make disciples of all the nations, baptizing them IN THE NAME of the FATHER and of the SON and of the HOLY SPIRIT,"
~ Jesus of Nazareth (Matthew 28:19 NKJV)

THE FATHER (OUR FATHER IN HEAVEN - THE FATHER OF JESUS)

"In this manner, therefore, pray: OUR FATHER IN HEAVEN, Hallowed be Your name."
~ Jesus of Nazareth (Matthew 6:9 NKJV) 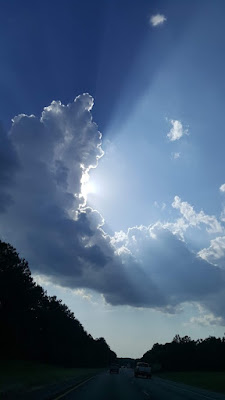 THE SON (JESUS OF NAZARETH - OUR SAVIOR)

"For God so loved the world that He gave His only begotten Son, that whoever believes in Him should not perish but have everlasting life. For God did not send His Son into the world to condemn the world, but that the world through Him might be saved."
~ Jesus of Nazereth (John 3:16-17 NKJV)

"And I will pray the Father, and He will give you ANOTHER HELPER, that He may abide with you forever—THE SPIRIT OF TRUTH, whom the world cannot receive, because it neither sees Him nor knows Him; but you know Him, for He dwells with you and will be in you. I will not leave you orphans; I will come to you. “A little while longer and the world will see Me no more, but you will see Me.  Because I live, you will live also. At that day you will know that I AM IN MY FATHER, AND YOU IN ME, AND I IN YOU.
~ Jesus of Nazareth (John 14:16-20 NKJV)

"When the Day of Pentecost had fully come, they were all with one accord in one place. And suddenly there came a sound from heaven, as of a rushing mighty wind, and it filled the whole house where they were sitting. Then there appeared to them divided tongues, as of fire, and one sat upon each of them. AND THEY WERE ALL FILLED WITH THE HOLY SPIRIT and began to speak with other tongues, as the Spirit gave them utterance."
(Acts 2:1-4 NKJV)

THE MYSTERY WHICH HAS BEEN HIDDEN - NOW HAS BEEN REVEALED - CHRIST IN YOU, THE HOPE OF GLORY

"the mystery which has been hidden from ages and from generations, but now has been revealed to His saints. To them God willed to make known what are the riches of the glory of this mystery among the Gentiles: which is Christ in you, the hope of glory."
(Colossians 1:26-27 NKJV)

"Let this mind be in you which was also in Christ Jesus, who, being in the form of God, did not consider it robbery to be equal with God, but made Himself of no reputation, taking the form of a bondservant, and  coming in the likeness of men. And being found in appearance as a man, He humbled Himself and became obedient to the point of death, even the death of the cross. Therefore God also has highly exalted Him and given Him the name which is above every name, that at the name of Jesus every knee should bow, of those in heaven, and of those on earth, and of those under the earth, and that every tongue should confess that Jesus Christ is Lord, to the glory of God the Father. (Philippians 2:5-11 NKJV)

"let it be known to you all, and to all the people of Israel, that by the name of Jesus Christ of Nazareth, whom you crucified, whom God raised from the dead, by Him this man stands here before you whole. This is the ‘stone which was rejected by you builders, which has become the chief cornerstone.’ Nor is there salvation in any other, for there is no other name under heaven given among men by which we must be saved.”
(Acts 4:10-12 NKJV)

CHILDREN OF GOD - HOPE IN THEIR FATHER, PURIFY THEMSELVES, PRACTICE RIGHTEOUSNESS, AND LOVE ONE ANOTHER ... FOR HIS SEED REMAINS IN HIM

"Behold what manner of love the Father has bestowed on us, that we should be called CHILDREN OF GOD! Therefore the world does not know us, because it did not know Him. Beloved, now we are CHILDREN OF GOD; and it has not yet been revealed what we shall be, but we know that when He is revealed, we shall be like Him, for we shall see Him as He is. AND EVERYONE WHO HAS THIS HOPE IN HIM PURIFIES HIMSELF, just as He is pure. Whoever commits sin also commits lawlessness, and sin is lawlessness. And you know that He was manifested to take away our sins, and in Him there is no sin. Whoever abides in Him does not sin. Whoever sins has neither seen Him nor known Him. Little children, let no one deceive you. He who practices righteousness is righteous, just as He is righteous. He who sins is of the devil, for the devil has sinned from the beginning. For this purpose the Son of God was manifested, that He might destroy the works of the devil. Whoever has been born of God does not sin, FOR HIS SEED REMAINS IN HIM; and he cannot sin, because he has been born of God. In this the CHILDREN OF GOD and the children of the devil are manifest: Whoever does not practice righteousness is not of God, nor is he who does not love his brother. For this is the message that you heard from the beginning, that we should LOVE ONE ANOTHER, not as Cain who was of the wicked one and murdered his brother. And why did he murder him? Because his works were evil and his brother’s righteous.
(1 John 3:1-12 NKJV)

THE PRAYER OF JESUS FOR YOU

Jesus spoke these words, lifted up His eyes to heaven, and said: “Father,  the hour has come. Glorify Your Son, that Your Son also may glorify You, as You have given Him authority over all flesh, that He should give eternal life to as many as You have given Him. And this is eternal life, that they may know You, the only true God, and Jesus Christ whom You have sent. I have glorified You on the earth.  I have finished the work  which You have given Me to do. And now, O Father, glorify Me together with Yourself, with the glory which I had with You before the world was.

"I do not pray for these alone, but also for those who will believe in Me through their word; that they all may be one, as You, Father, are in Me, and I in You; that they also may be one in Us, that the world may believe that You sent Me. And the glory which You gave Me I have given them,  that they may be one just as We are one: I in them, and You in Me;  that they may be made perfect in one, and that the world may know that You have sent Me, and have loved them as You have loved Me.

“Father, I desire that they also whom You gave Me may be with Me where I am, that they may behold My glory which You have given Me; for You loved Me before the foundation of the world.O righteous Father!  The world has not known You, but I have known You; and  these have known that You sent Me. And I have declared to them Your name, and will declare it, that the love with which You loved Me may be in them, and I in them.”
(John 17:1-26 NKJV)

THE FATHER, THE SON, THE HOLY SPIRIT, AND YOU

Additionally, the church is the body of Christ (reference scriptures in the following link).

So, with all this being true, what would you say that the child of God is a part of (one with) according to Jesus's prayer in John 17?