The recent apostolic resurgence/movement is in many ways a godly thing. The Lord has always commissioned leaders to help advance His kingdom, and it’s wonderful to see many awakened to this previously overlooked calling. However, this generation really needs to get clear about a few things in regard to the apostolic: 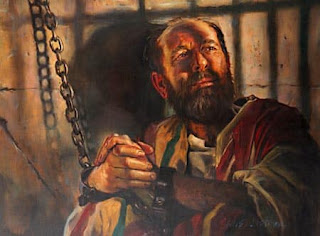 If you are ACTUALLY called as an apostle (many who claim to be are not), it’s an invitation to die. Stop. Before you print up new business cards or change your Facebook profile, read that again: You are called to DEATH.

For some that literally means martyrdom. For others, it will mean laying down your livelihood for the body of Christ. You will be persecuted more than most in your pioneering. You may be poor while others made rich. You may experience struggle and suffering while others comfort. Yet, you are called to love even more deeply!

Before all of this, you will likely be tested and tried by fire - not because of sin, but to fulfill all righteousness (not the salvation kind, but sanctification). You may be rejected by many. What you do in these seasons will determine if God can entrust you with governing His people.

The Lord may endue you with great wisdom and supernatural power, but not to flaunt - to serve. To be a true “sent one” is to be on the front lines, often taking the greatest blows to protect those you lead. This is your call. I’m not saying the Lord may not bless you with some wonderful things along the way, but as a whole, imitating Christ is your destiny!

Now, here’s what being an apostle of God SHOULD NOT look like: wearing fancier clothes, nicer shoes, or driving a nicer car than anyone in your community as a reward for being called. It doesn’t look like saying the word “apostle” or “apostolic” every time you talk to someone about your ministry or on social media broadcasts. It’s not demanding people address you by title, as if your name changed. Your name didn’t change; His grace came.

Also, you’re not automatically more spiritual than others. You may be spiritual or you may not be. That depends on your life in the secret place with God, not as a result of a title. You’re not allowed to lord over people, even in “steering the ship.” Condescension is not the way of the kingdom of God.

True apostles have authority, but to be floors, foundations, and trampolines for others to be launched into their destinies. In that authority, God will affirm you, but He will also correct you more strictly! You are to go lower, be kinder, serve longer, and work harder than anyone, so that those you plant, raise up and send out will flourish in Christ Jesus!

For Scriptural references, read the New Testament again. Not desiring to be mean, but we leaders really need to grow up and stop receiving validation by fleshly means. Our worth should come from the Father, in merely being His son or daughter.

I hope this helps someone take down their Facebook title and instead serve in love today!