Different Kinds of Faith In Christ

Well, which is it?

I say it is easier to say "Your sins are forgiven you."

However, only someone with the backing of power from heaven can say "rise up and walk."

In this case, Jesus continued...


But that you may know that the Son of Man has power on earth to forgive sins” — He said to the man who was paralyzed, “I say to you, arise, take up your bed, and go to your house.” Immediately he rose up before them, took up what he had been lying on, and departed to his own house, glorifying God. And they were all amazed, and they glorified God and were filled with fear, saying, “We have seen strange things today!” (Luke 5:24-26 NKJV)

Jesus said to the man "arise, take up your bed" to demonstrate that He also has power on earth to forgive sins.

The power of healing proves the truth that Jesus also has power on earth to forgive sins.

This goes right to the heart of faith in Christ.

Right now, which is easier to believe?
I say that option five is the hardest to believe. 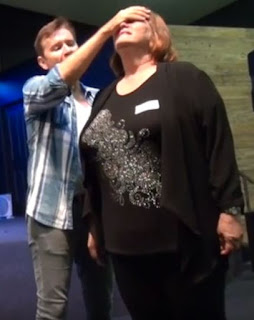 Option five is the hardest to believe because this kind of faith demands the demonstration of the truth - right now. The first three can be said without demonstration. The first four allow room for excuses and delays.

Now, pressing further, which of the above options are actually true?

Further study... I pray that this builds the faith of anyone who encounters it.

Believer in Christ: Jesus is alive in you now!

8 Verses that Show Jesus Christ Lives in You

Related Audio: The Reality of Healing in Christ Jesus - by Dan Mohler


Jesus said to him, “If you can believe, all things are possible to him who believes.” Immediately the father of the child cried out and said with tears, “Lord, I believe; help my unbelief!” (Mark 9:23-25 NKJV)

In depth ... Into The Full Gospel ... Reality in Christ ... The True Gospel is Reality Now in Christ.